British Columbia is well-known for its abundant blueberries, apples and cherries. But many workers who pick these crops are paid a “piece-rate” wage that can promote an unsafe pace of work and may even be less than minimum wage.

Anelyse Weiler, one of the PhD candidates I supervise, recently penned an op-ed about the implications of the piece-rate wage with Mark Thompson (UBC Professor Emeritus) and David Fairey (Co-Chair of the BC Employment Standards Coalition). They call on the provincial government to implement the recommendations of the Fair Wages Commission and ensure that all workers receive at least minimum wage. This builds on a related op-ed Fairey and Weiler wrote for the Vancouver Sun on May Day.

Their op-ed was published in the Penticton Herald and Kelowna Courier, and was also on the Canadian Centre for Policy Alternatives BC blog. 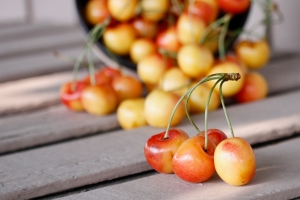 As part of a special issue in Canadian Food Studies, Anelyse Weiler, one of the PhD candidates I supervise, has published a policy commentary on five ways Canada’s forthcoming National Food Policy can advance equity and dignity with migrant farm workers. She argues that to realize a healthy food system for all members of our communities, the national food policy cannot be for Canadians alone. Her piece concludes by underscoring dynamics between farm labour migration and climate change.

To build on the insights from this policy commentary and her dissertation fieldwork, Anelyse will be co-organizing a workshop with injured migrant farm workers, grassroots organizers and a farmer at Food Secure Canada’s 10th Annual Assembly in Montreal.

A crowded van picks up an elderly Punjabi grandmother. After a 45-minute unpaid ride to the farm, she picks blueberries in the hot sun for up to 10 hours with no overtime pay. If she slows down or takes too many breaks in the shade, the contractor may arbitrarily decide she hasn’t earned enough hours to qualify for EI to top up her sparse winter income. If the harvest is poor or her employer doesn’t record berry weights accurately, she often earns less than minimum wage.

No one would wish this on their grandmother.

Over the past couple of weeks, Anelyse Weiler, one of the PhD candidates I supervise, has published several pieces of public scholarship related to her research. The excerpt above is from an op-ed she co-authored with David Fairey in the Vancouver Sun on the sub-minimum piece-rate wage for hand harvesters in British Columbia.

Anelyse and Professor Amy Cohen of Okanagan College co-authored another op-ed analyzing how Canadian immigration policy makes racialized farm worker women vulnerable to sexual violence. It was initially published in The Conversation and has since been re-published elsewhere, including The National Post and The Tyee.

In the current labour-themed issue of Alberta Views Magazine, Anelyse reviewed Jason Foster’s new book Defying Expectations, which explores unlikely labour organizing successes of the United Food and Commercial Workers 401. She has also written a forthcoming book review of Good Apples for Food, Culture & Society and a commentary on migrant workers and the national food policy in Canadian Food Studies.

Anelyse Weiler, one of the PhD candidates I’m supervising, is the lead author of a new article in International Migration: “Food Security at Whose Expense? A Critique of the Canadian Temporary Farm Labour Migration Regime and Proposals for Change.” Co-authored by Janet McLaughlin and Donald Cole , the article focuses on linkages between food security, food sovereignty, and Canada’s migrant farm worker regime. One of their core arguments is that pitting food security for Canadians against the rights of migrant farm workers is a false moral choice. They propose a range of policy options to advance dignity alongside migrant farm workers. These include granting migrant farm workers full immigration status on arrival, supporting worker-owned farms, and rethinking regulations that underpin concentrated corporate power in the food system.

Anelyse is currently conducting her dissertation fieldwork in BC and Washington state. Last year, the BC Canadian Centre for Policy Alternatives acknowledged her efforts to inform more just and sustainable food systems through the Power of Youth Leadership Award for Research, Analysis and Solutions.